See All Villas in Ibiza 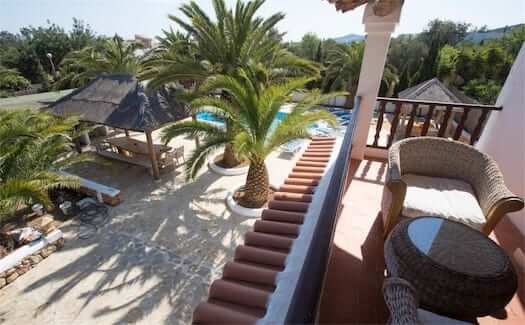 Villa Zubizarreta is a beautiful, large villa in the Playa den Bossa area. This 400-year-old typical Ibizan finca was one of the original country farmhouses of this location – Sa Carroca. Just outside of Ibiza Town, it’s a popular & convenient villa rental area. 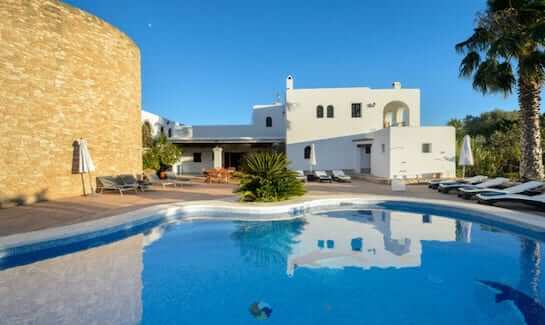 Villa Ramos is a huge Ibiza Villa with a pool, jacuzzi & stunning sunset views that is only a 10-minute walk to San Anonio Bay and the infamous Ocean Beach Club. It’s our most popular villa in Ibiza for hen parties for a reason. 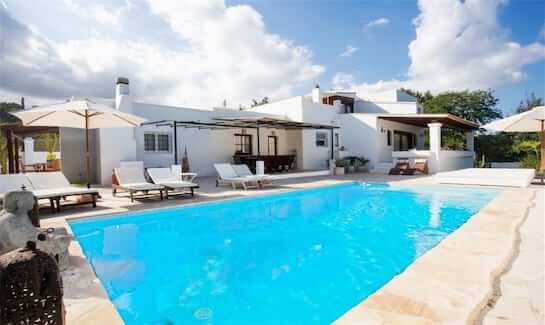 Villa Casillas is a large, bright villa in a peaceful location, but ideally situated to reach Ibiza Town and Playa den Bossa with ease and is even within walking distance of two of the island’s Superclubs. 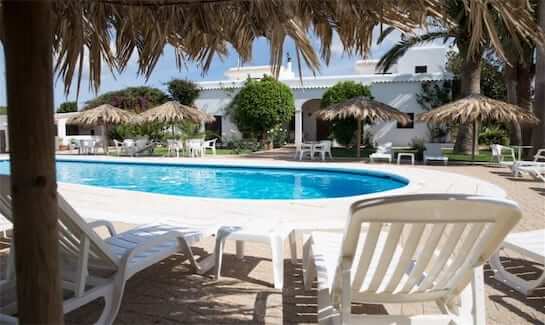 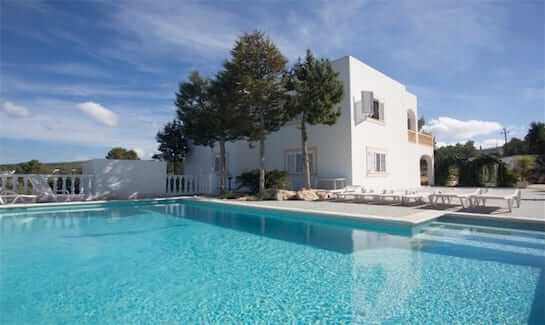 Villa Busquets has always been very popular due to its location, which is peaceful and private. However, a twenty-minute stroll through the nearby country path will bring you right into the busy and vibrant resort of San Antonio Bay. 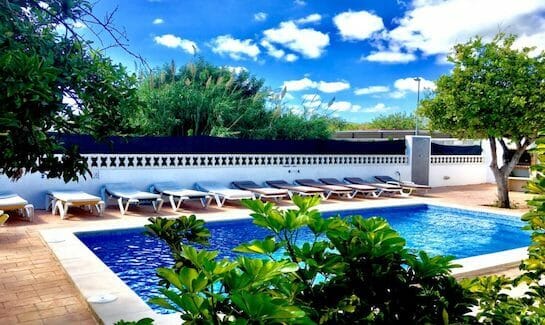 Villa Xavi is a modern eight-bedroom property with a private pool. This large villa, close to Playa den Bossa, is ideal for clients who don’t want to hire a car. Villa Xavi is close enough to the centre that it can be reached on foot within 10 minutes.

See All Villas in Ibiza

Planning a hen party abroad? Ibiza has everything you need. This party capital is packed with incredible nightlife, a great foodie scene and glorious weather. What’s more, flights from the UK take under 3 hours making it easily accessible wherever you’re coming from. And, when you are here, there’s plenty more to do than simply drink. Adventure through the white sands and blue seas, take a day trip to explore the ancient Old Town or get your Zen on at one of the many Ibizian yoga retreats. Ideal for groups of all sizes, and ages, Ibiza holds the crown for an unforgettable hen weekend away.

HOW TO GET TO IBIZA

Ibiza is easily accessible from most UK airports, and flights take just under 3 hours. As a popular destination, plenty of airlines head there so you have a choice when it comes to flights. It’s one of Europe’s party capitals, so you can expect the fun to start on the flight too. Once there, there’s plenty of taxis and buses to get around on. You can also explore the island on foot, via car, or by moped. 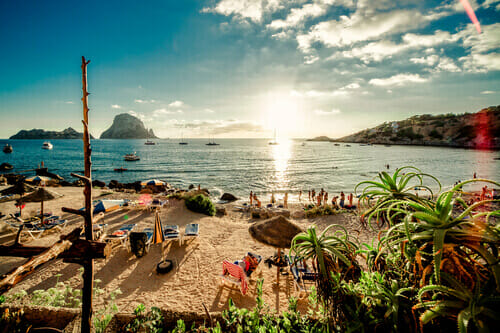 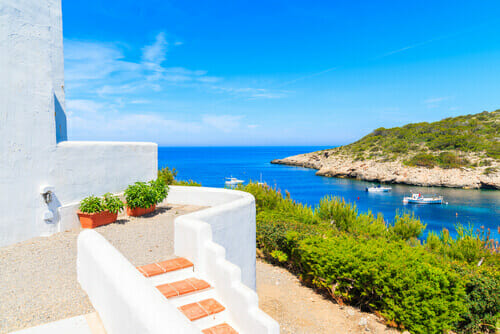 BEST PLACES TO VISIT IN IBIZA FOR HEN GROUPS

Don’t miss a trip to Bristol’s picturesque harbourside. When you think of Ibiza, you might envision neon lights, vodka shots and parties until the early hours. However, there’s another side of Ibiza that’s definitely worth a visit. The 16th-century walled city in Ibiza Town’s old quarter boasts cobbled streets, pedestrianised walkways and ancient architecture. Here, the restaurants and bars are independent and you get a real taste of Ibizan living.

Head south and you’ll reach incredible salt flats and magical woodlands where nature is wild. The area boasts one of the island’s best beaches surrounded by bars and cafes as well as a sunbed service for food and drink. We’ll have a daiquiri please…

Famous for its large nightclubs, excellent restaurants and vibrant bars, ‘San An’ is Ibiza’s party centre. Set in a glorious little bay of coves and villages, you’ll also find the famous Sunset Strip – with everything your hen party evening could ever need.

If you’re attracted to Ibiza’s alternative lifestyle, then North La Dalias and its market are for you. Pitching up every Saturday, more than 20,000 are said to visit the stalls every week. You’ll find clothes, accessories, crafts, souvenirs, artwork and more. With live music nights and food stalls, it’s a great place to head after the sun’s gone down.

Boasting a nice beach and great indoor food market, Santa Eulària is ideal to explore if you have a few spare days in Ibiza. It’s also home to incredible 16th-century architecture including the Puig de Missa – an impressive church located at the summit of the town. Don’t forget your camera because the views at the top are definitely worth a picture or two!

Home to legendary nightlife and a fantastic beach, this is Ibiza at its finest. Here, the clubs have a global reputation for a reason, and there’s something for all ages – including a waterpark and the island’s longest beach. However you want to celebrate your hen do, it’s possible in Playa d’en Bossa.

Head South West and you’ll find the famous rock formation in the sea – Es Vedrà. If you’re looking for a beach to relax on, you’ll be spoilt for choice here. Some of the best include Cala d’Hort (for its boat trips to see Es Vedrà up close), Es Cubells (for its cliffside church and secret coves) and Cala Vadella (for its typical holiday vibes).

A hikers paradise, Sant Josep and Sa Talaia are home to some of the island’s best walks and adventures. Sa Talaia is Ibiza’s highest peak and the walk to the top goes through some incredible villages and past an array of cute cafes and eateries. So if half your group fancy the climb and the other half don’t, there’s plenty for them to do in the area. 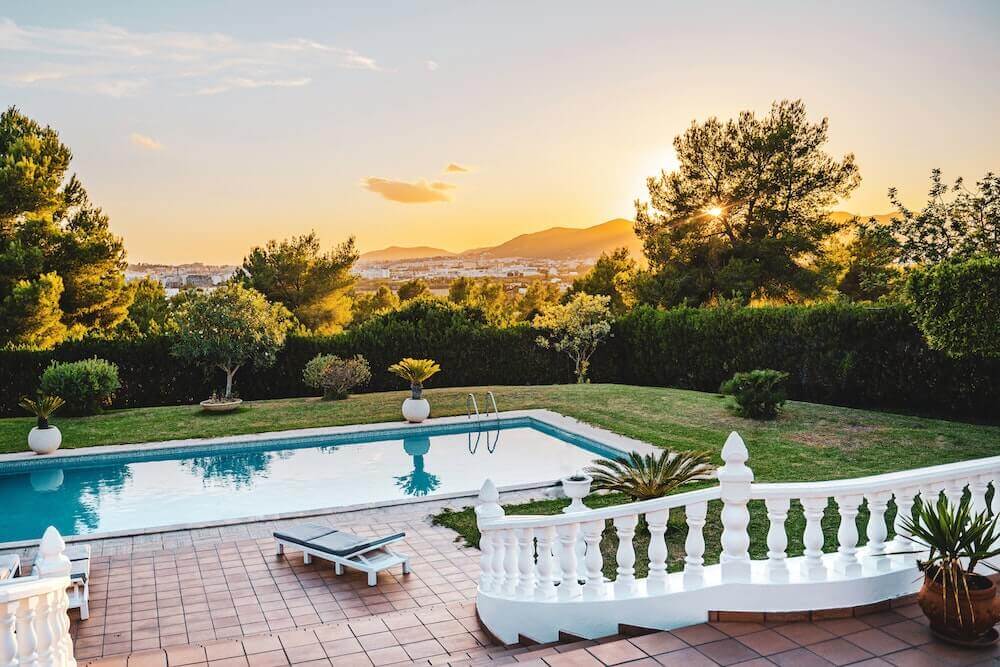 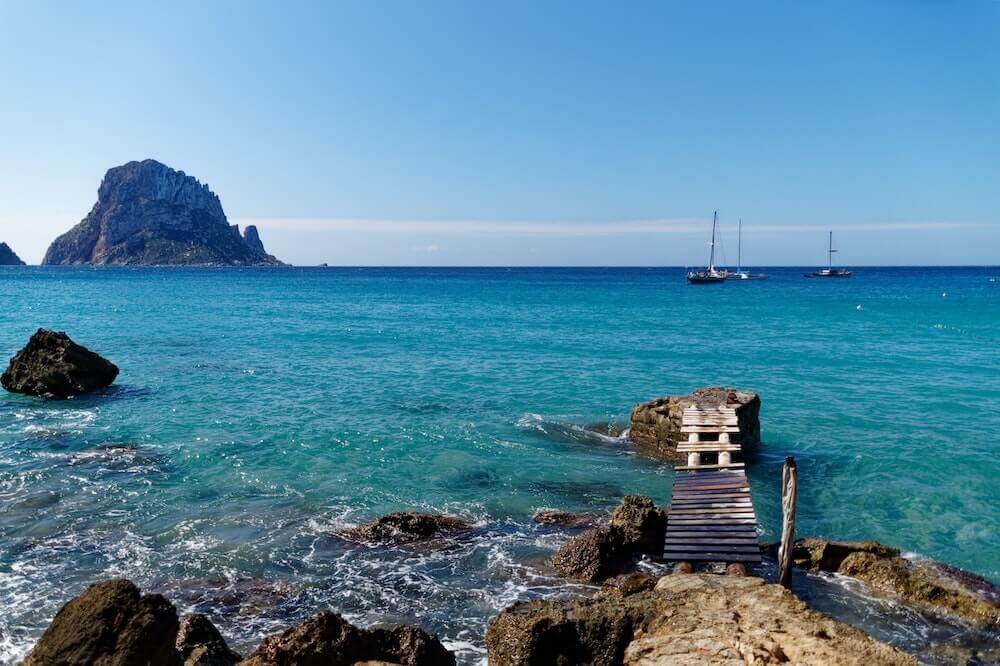 BEST BEACH BARS AND RESTAURANTS IN IBIZA FOR HEN GROUPS

If you’re a foodie, Ibiza won’t disappoint. From classy Mediterranean affairs and vegan-friendly bistros to burger joints and beach shacks, there really is something for every budget and palette. What’s more, in Ibiza, everyone’s up for a party so restaurants are more than willing to accommodate large groups until the early hours. Below are some of our favourites.

Situated on the beach, this place serves incredible food, delicious drinks and there’s even a morning yoga class that’s completely free. With its distinctive roof, cool wooden deck and luxury furniture, it’s hard to miss you and you’ll be glad you didn’t. Food-wise, think Italian influences and some of the best seafood around with dishes ideal for day and night. It’s no wonder celebrities of all kinds flock to this little slice of Ibiza haven.

For the ultimate slow boozy lunch, this chilled beach restaurant is just the thing. Located right next to the sea and serving first-class cuisine and fresh cocktails, sit back on the comfy sofas and basque in the heat. Of course, there’s always the classic chilled Ibiza tunes to really help you to unwind.

As far as Instagram-worthy restaurants go, this has got to be winning. Set over a dramatic cliff with views of the Sol d’en Serra bay, this relaxed beach club is ideal for long lunches. And come night, it turns into a chic restaurant offering mouth-watering dishes. The day beds are great for those wanting to relax under the midday rays too. For an all-day beach party destination, look no further.

A firm favourite with tourists and locals, this shack sells simple and honest food. Find a table, high above the rocks, take in the incredible scenery and peruse the menu of tantalising fish dishes and seafood sides.

Sunset Ashram is THE place to celebrate your hen weekend – from morning sunrise to evening sunset. From the beach bar, you can enjoy cocktails, good music and even better views. And if you’re looking for something later on in the day, it’s got to be the restaurant which serves sushi, hindu and mediterranean food. 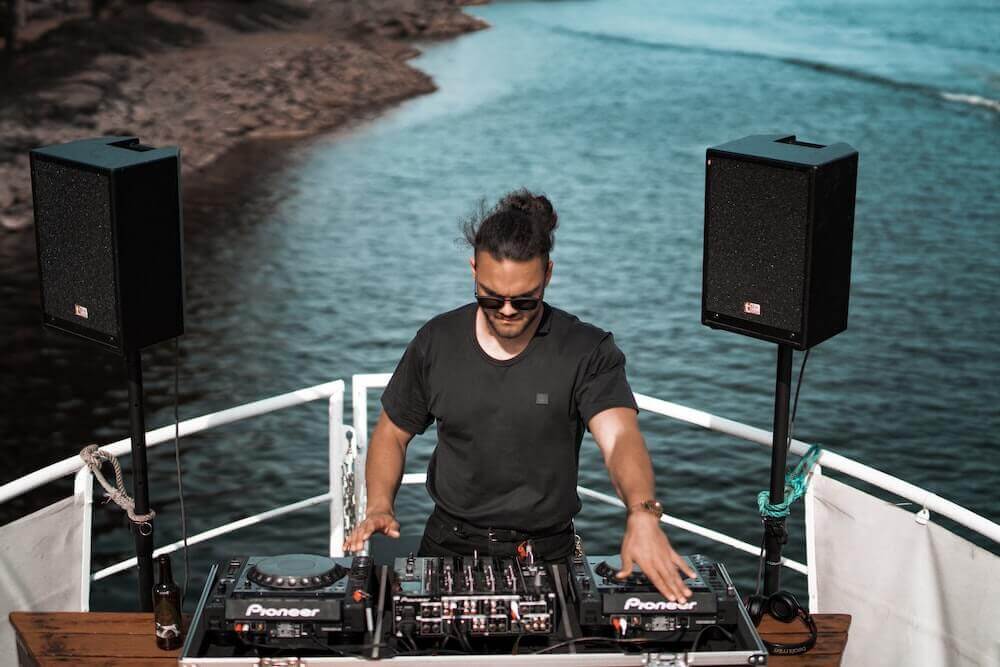 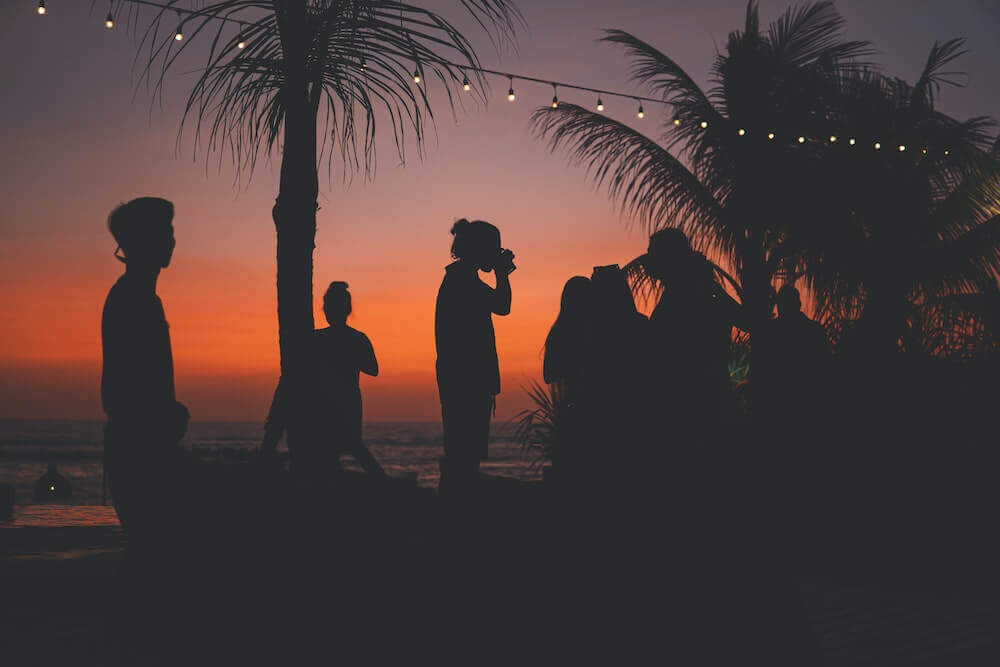 If you’re a fan of tech-house, head to Playa d’en Bossa for the night of your lives. With enough space for over 5,000 people, this superclub really is just that.

Home to some incredible DJ line ups and unbelievable productions, an evening at Ibiza’s open-air nightclub has got to be top of the list.

The party at DC10 never ends. No, really – the club is open from 4 pm until 6 am with over 1,500 partygoers letting their hair down every night to the best techno tunes.

Famous for its daytime pool parties, anyone who is anyone has been snapped here. Expect a mega lineup, endless drinks and a champagne spray or two.

This is where musical history and modern hedonism meet. It’s unbelievable, inspiring and a little strange but a party in these nooks and crannies is certainly unforgettable.

A trip to Ibiza isn’t complete without heading to one of its best-loved clubs. Lineups consist of tech-house giants and some of the biggest DJ names around.

It’s an Ibiza favourite for a reason with names like David Guetta frequently gracing the stage. Grab your girls, pre-book your tickets and get ready to let your hair down.

With enough space for 10,000 people, raves at this club – which is one of the world’s biggest – are definitely not to be missed.

Hosting some of the biggest DJs around, Eden and its after-hours clubbing scene is sure to provide a few memories that aren’t to be repeated on the big day…

There’s a reason this outdoor venue attracts some of the biggest DJs and celebrity names from all around the world. Doors open at 6 pm too which is great for those who prefer to hit the hay come midnight.

Whatever music you like, you’re sure to find a boat party to satisfy and most even include entry to one of Ibiza’s superclubs. Expect great music, lots of booze and even the odd BBQ. Yes, mum, we’re lining our stomachs.

This is a raver’s ultimate dream and if you want to party until the early hours, it’s a great option. Tickets cost just €20 and you get a free drink included – it’s practically an investment.

This is where luxury meets lavish and creates the ultimate after-dark party. With a capacity of 1,000, it might be smaller than other Ibiza clubs but it’s still worth a trip.

This place certainly doesn’t need an introduction. Enjoy bottle service from your beach bed, get that pic for the gram and keep an eye out for a celeb or two.

A hen party in Ibiza doesn’t just have to be about drinking from dawn to dusk. Unleash a little creativity and healthy competition with a Nude Life drawing class. Take some time out for 1.5 hours and enjoy a classy art class, led by a professional nude life model, and filled with games that can be as naughty or nice as you like.

Having a day by your private pool? Turn your celebrations up a notch with a private butler service. For one hour, your cheeky butler will serve your party drinks and play a few games. This is what being famous must feel like, right?

See Ibiza like never before. Set out on a boozy boat cruise, take in the views and party with your besties as you head out to sea. Choose between fancy dress themes, musical preferences and BBQ menu – there’s a different boat party to suit every type of hen.

What’s a hen party without an evening you don’t remember? Ibiza is perfect for a good old-fashioned bar crawl – and you can either host your own or pay for a professional to show you the ropes. We’re definitely not looking forward to tomorrow…